A History of GFS in England and America

GFS history dates back to the 1870s, an age that seems to have little connection with our own times. Yet, it too was a day of new things. Steam power for travel on land and sea was still a matter of wonder. It turned the wheels of the new spinning and weaving mills springing up everywhere. The Industrial Revolution had begun.

It was also a new age for girls and women in England and America. They began pouring into the manufacturing towns to work in the factories or to serve in homes of wealthy industrialists. Some girls came with their families, but many of them arrived alone. The work was drudgery, yet for some girls it offered independence — and a chance to go out into the world and “do something”. We, who may take for granted the idea of working at all sorts of jobs, can scarcely realize the stir caused by these pioneer girls of the 1870s. The girls often found, however, enjoyment of their “freedom” limited. They worked long hard hours and were lonely and without friends. They had no appropriate social outlets for their free time.

In England, Mary Elizabeth Townsend, a young married woman, watched this change with concern. She herself was a pioneer. Vivacious, talented — she painted and sculpted well, and was a gifted musician — she was alert to the new movements of her day. When her husband was a candidate for Parliament, she campaigned with him and proved to be the better speaker of the two, at a time many people considered it improper for women to speak in public.

Mary Townsend was not a social reformer in the usual sense. But as founder of the GFS, she was one of the people who helped change the conditions of the 19th century to those we enjoy today.

Living in the country and working with a rescue organization in the Diocese of Winchester, Mrs. Townsend saw the challenges of girls who left their country homes to become servants in large town households. The girls were cut off from their families more completely than we can understand; they were uneducated and inexperienced, and they were lonely.

Mrs. Townsend thought it would make all the difference in their lives if they knew of someone on whose friendship and knowledge they could call on at need. A woman of keen and thorough mind, she outlined a plan and then considered her idea for two years, until 1875, in order to make sure her idea was practical. She proposed her idea to the Archbishop of Canterbury, her own rector and three women.

On January 1, 1875, the Girls’ Friendly Society was founded. The first girl’s or women’s organization in the Church of England, its purpose was to provide girls with friendship and recreation, bound in a fellowship of Christian love and service.

In America women’s lives were also changing. Quiet New England villages were transformed almost overnight into industrial centers where the blast of the mill’s whistle marked the time of day for thousands of people.

Lowell, Massachusetts was such a town and the home of Elizabeth Mason Edson. Her father was the rector of St. Anne’s Church. Elizabeth was doing what she could to make her Sunday School class a center of friendship for the girls. She felt deep concern about the girls’ working conditions in the Lowell mills.

Elizabeth read in an English magazine, “The Packet”, about the newly formed Girls’ Friendly Society. She realized the potentialities of GFS for American girls and women. She wrote to England for more information.

In 1877, Elizabeth Mason Edson began a GFS branch. The nucleus of the branch was her Sunday School class, but it included other girls from all over Lowell.

GFS defined itself as “a week-day group work organization within the Protestant Episcopal Church, whose members accept the Christian faith and seek — in the fellowship of worship, study, work and play — to serve God and extend His Kingdom”. In 1879, the Massachusetts diocesan organization served as the center for national activities. Four years later the GFS signed a treaty granting the use of its name and emblem to the Girls’ Friendly Society in America (GFSA). The Central Organization of the GFSA, established in 1886, provided a true national organization. GFS started publication of magazines in 1888. A constitution adopted in 1893 was later amended in 1917; the organization incorporated in 1895.

GFS is Active in Social Programs for Immigrants and Laborers

During its early years, GFSA established homes and centers for young workingwomen. Through close ties with the Chaplain of the Port of New York, immigrant women arriving in America received job and housing assistance. GFSA assisted in forming the Traveler’s Aid Society in 1887 and began making systematic reports to the General Convention of the Episcopal Church in 1895.

Between 1900 and 1920, GFSA sought protective legislation for girls, worked for labor reform, and provided a number of war related services including raising thousands of dollars for Red Cross ambulances. In 1920, the National Council named GFSA one of the Cooperating Agencies of the Episcopal Church.

In the mid-1920s, GFSA changed its name to The Girls’ Friendly Society of the United States of America (GFS/USA) and reincorporated in 1929. In the years that followed, GFS/USA became involved with refugee aid, issues involving women and industry, and armament limitations.

Changes to the Structure of GFS

In 1948, a revision of the GFS Constitution limited GFS membership to those girls and young women between the ages of 7 and 21. As a result, some women over the age of 2I formed a separate organization known as the Sponsors of the Girls’ Friendly Society in the United States of America.

GFS/USA became an official observer at the United Nations in 1953. During the same year, GFS/USA opened national offices in New York City. GFS/USA joined the newly formed GFS World Council in 1955. The World Council, which meets every three years, was formed to promote fellowship between the member countries by the exchange of information and ideas, to promote world assemblies and camps and to encourage visits and correspondence between members.

The Summer Opportunities Program began in 1955; members who participated in the program spent their summer working in the Mission Fields of the Church.

In the mid-sixties, there was a movement within the national church to question the need for and value of individual organizations such as GFS, ECW other guilds, within the church. This resulted in extensive cutbacks in the national program due to lack of funds. The constitution and bylaws were suspended in 1966, eliminating the operation of GFS/USA as a national organization. The Society’s capital assets were transferred to the Domestic and Foreign Missionary Fund of the Protestant Episcopal Church. A GFS Trust Fund, to be managed by the new GFS Board of Directors, was established. The National Office of GFS/USA closed on December 31, 1966. The Christian Education Department of the Executive Council of the Episcopal Church assumed responsibility for the national program. Many diocesan and branch programs continued to operate as before, but others simply collapsed without the link to a national office.

An Ad-Hoc Committee, later named the National Coordinating Board, formed in 1967. This board, consisting of diocesan presidents and key persons, served as a communications link between the organized diocesan structures and remote branches of the Society. The determination and dedication of this committee resulted in the unification of the National Board of Directors and the National coordinating Board as one Executive and Legislative Board of GFS/USA. On March 31, 1979, a Declaration of Unification was signed containing the same definition of GFS as in 1877. This act re-established GFS/USA National Assembly and made it possible for the
organization to once again participate in the international GFS World Council.

At the ECW Triennial meeting in 1985, GFS/USA was seated as an associate organization with two voting delegates. The 1986 National Assembly adopted a resolution opposing apartheid, an action reminiscent of GFS opposition to racism in 1890. 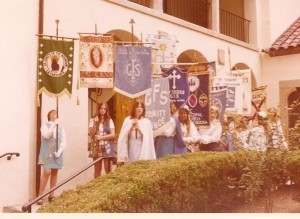 GFS in the New Millennium

Today GFS diocesan and branch programs are meeting new challenges and continuing, through both tradition and change, to meet the needs of GFS members.

There are no upcoming events.