GFS LA holding a Zoom series gathering our members from around the diocese.

GFS-LA has gone on many outings together – camp, beach parties and rally days. Now we are staying at home due to COVID-19, but to respond to the current needs of our girls, we have a new online event – Fly Away with GFS!

Our skilled GFS-LA leaders are holding a 3 weekend Zoom series to help girls acknowledge, evaluate and address their social, emotional, spiritual and physical needs during the stay-at-home orders.  Each meeting involves activities such as dancing, spiritual devotion, teaching and a chance for girls to share ideas and talk.

Girls got involved right away, chatting on the sidebar, waving to each other, sharing feelings and joining in the dancing. This is an evolving activity as we all get used to a different format.  Next meeting is May 23, grab your ticket contact [email protected]!

It is a GFS tradition to make palm crosses for the church for use on Palm Sunday. Gather your girls for a meeting the day before Palm Sunday and learn this fun craft. There are many how to videos and instructions online.

Below are two versions of the cross to try. Each requires patience and precision. Don’t be surprised that there will be a lot of frustration at first. However, once the girls learn the trick of folding a palm cross, you won’t be able to stop them. I call the ability to fold a palm cross the secret handshake of GFS.

Finish up your Saturday afternoon meeting with an additional craft or a game. 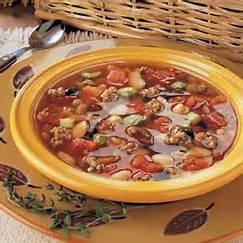 Here is another great recipe for your Souper Bowl Sunday fund drive. This one is adapted from Food.com and is used by the GFS at St. John’s in Costa Mesa.

Here is a link to the recipe cards created by Marie Greatorex for this recipe.

Red eggs are traditional in any Greek Easter celebration. The deep red represents the blood of Christ and rebirth.

Make the dye with the onion skins: In a stainless saucepan, place skins of 15 yellow onions and 2 tablespoons of white vinegar in 4½ cups of water and bring to a boil. Lower heat and simmer, covered, for 30 minutes. Strain dye into a glass bowl, and let cool to room temperature. although the color of the dye is not red, the final product will be.

Rinse 12 eggs to remove anything that might be clinging to the eggs.

In a stainless saucepan, add the cooled strained dye and eggs at room temperature. The eggs should be in one layer and covered by the dye.

Bring to a boil over medium heat. When boiling, reduce heat to low, cover, and simmer.

Dyeing time will be affected by the color of the eggs. Start checking for color at 12-15 minutes. Do not simmer longer than 20 minutes. If eggs are not a red enough color after 20 minutes, leave in the pot and remove from heat. When the pot as cooled enough, place in refrigerator and let sit until desired color is reached.

When eggs are the right color, remove eggs with a slotted spoon and cool on racks.

When they can be handled, coat lightly with olive (or other edible) oil and polish with paper toweling.

Refrigerate until time to use.

When your eggs are cooled, you may choose to celebrate with a traditional Greek Easter game called tsougrisma. The word tsougrisma means “clinking together” or “clashing.” It is pronounced TSOO-grees-mah.

Each player holds a red egg, and one taps the end of her/his egg lightly against the end of the other player’s egg while saying  Khristós Anésti! (Christ is Risen) while the other responds Alithós Anésti! (He is Risen Indeed!) The goal is to crack the opponent’s egg. When one end is cracked, the winner uses the same end of her/his egg to try to crack the other end of the next opponent’s egg. The player who successfully cracks the eggs of the other players is declared the winner and, it is said, will have good luck during the year.

Make pumpkin pies at your branch meeting just before Thanksgiving! If you use frozen pie crusts and canned pumpkin, the project will be as easy as – you guessed it – pie!

The girls learn basic cooking skills – using a can opener, cracking eggs, measuring ingredients, following a recipe, and working together. They can easily master this recipe and be proud of the results. Our family secret is to using heaping spoonfuls of the spices.

Since pies take about 50 minutes to cook, have the girls mix up their pies at the beginning of the meeting, even before snack. Everything will be done and ready to go home at the end of the meeting. Mom and Dad will be so happy to have a fresh pie either for dinner or perhaps for the Thanksgiving meal!